While most people think of hand-to-hand combat when the topic of martial arts comes up, the vast amount of fighting styles encompass a wide variety of techniques. Kendo is a rather unique martial art, in that it revolves around the use of bamboo swords. As a sport, Kendo is an activity that combines martial arts training and values with strenuous physical activity. It's a great way to stay in shape and flex your competitive muscle in a one-of-a-kind martial art that combines swordsmanship with intense athleticism.


Kendo is a relatively modern martial art, but it descended from Japanese swordsmanship, also known as Kenjutsu. The sport uses bamboo weapons known as shinai and protective body armor, known as Bogu. Although it's practiced worldwide in present day, the origins of the sport extend back to 18th century Asia.

In the Shotoku Era (1711-1715), Naganuma Shirozaemon Kunisato was the first to develop a standard training method using shinai and bogu. Although originally designed as a practice for warriors, it has since evolved into a sport all its own.

Although modern Kendo began with Kunisato and later with Chiba Shusaku Narimasa, the popularity of the sport exploded and quickly expanded from a few isolated regions to the entirety of Japan.

In 1946, practice of Kendo was banned by the occupying powers after World War II as part of "the removal and exclusion from public life of militaristic and ultra nationalistic persons." As soon as Japan had their independence restored, however, the All Japan Kendo Federation was founded in 1952.

The International Kendo Federation was created in 1970, and remains the governing body for the sport of Kendo worldwide.


Practitioners of Kendo are called Kendoka, meaning "someone who practices kendo. Occasionally, the word Kenshi — meaning swordsman — is used instead.

As of September 2007, there were around 1.48 million registered dan ranked Kendoka in Japan alone. The active practitioners inside the country number around 477,000. From these figures, the All Japan Kendo Federation estimates that there are over 6 million practitioners worldwide.

While not as widespread as more easily recognizable martial arts like Taekwondo or Karate, it's definitely a major player in the martial arts scene with a devoted following of Kenshi.

Concept and Purpose of Kendo


In 1975, shortly after the creation of an international governing body, the All Japan Kendo Federation sought to develop a standard concept and purpose for Kendo as a whole. The following is an excerpt from their publication, "The Concept and Purpose of Kendo."

Kendo is a way to discipline the human character through the application of the Katana.

To mold the mind and body.
To cultivate a vigorous spirit
And through correct and rigid training,
To strive for improvement in the art of Kendo.
To hold in esteem human courtesy and honor.
To associate with others with sincerity.
And to forever pursue the cultivation of oneself.
Thus will one be able:
To love one's country and society;
To contribute to the development of culture;
And to promote peace and prosperity among all peoples.

It's simple to see that, like many martial arts, Kendo focuses on the development of the whole person in mind, body, and spirit. It's designed as a method of self-discipline and self-improvement — both mental and physical. 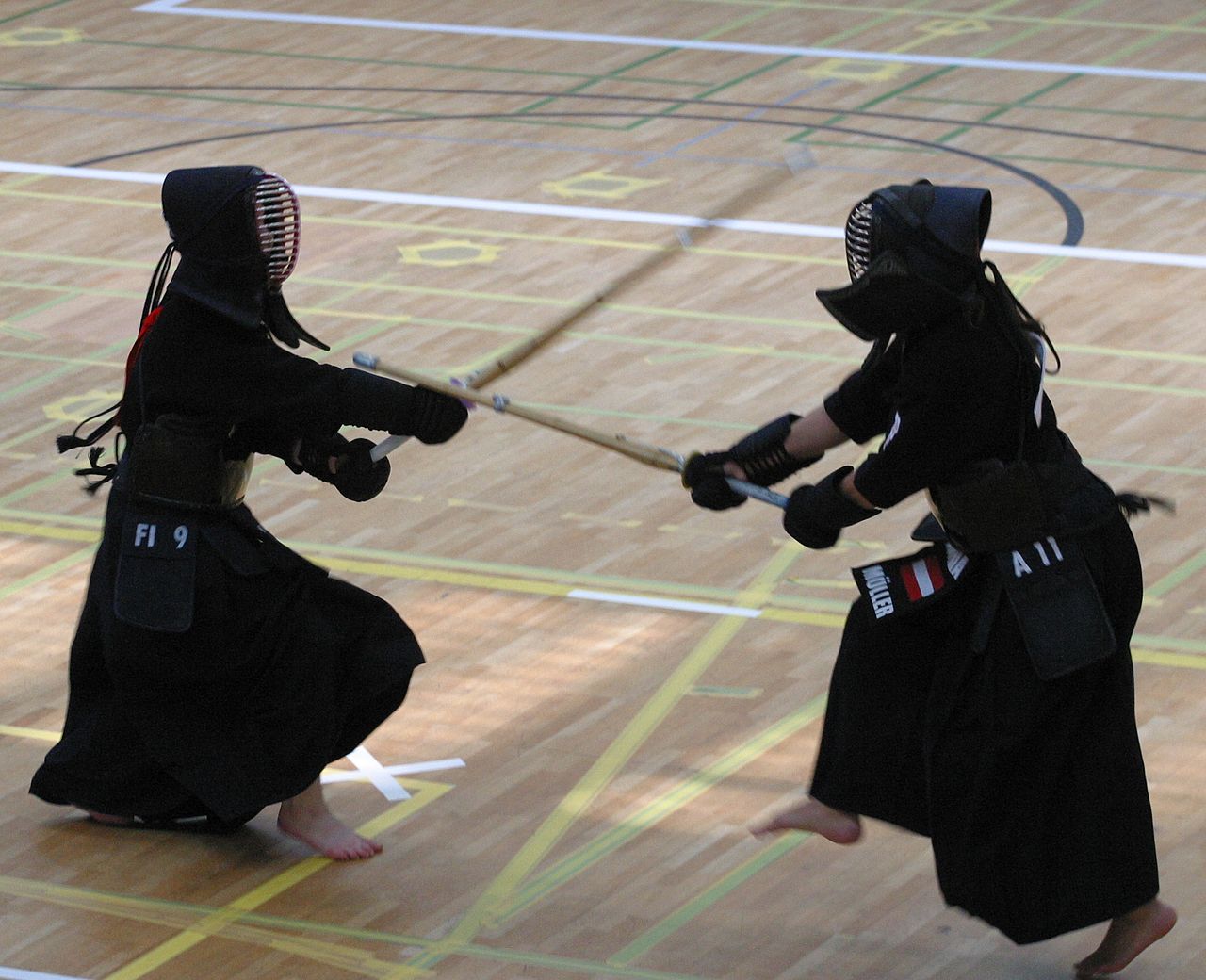 
Kendo training is rather loud when compared to other martial arts, as Kendoka uses a shout to express their fighting spirit while striking. Additionally, fighters tend to execute a stamping motion when making a strike.

Kendoka trains and fights barefoot. Traditionally, the sport is practiced in a dojo, but standard sports halls or other spacious venues are often employed in the absence of this traditional location.

The techniques in Kendo consist of both strikes and thrusts. The strikes are targeted, moving only towards specific areas like the wrists, head, or body (all of which are protected by armor). Thrusts, on the other hand, are only allowed to the opponent's throat. However, since these sorts of moves can easily harm a fighter if aimed incorrectly, the use of strikes is far more emphasized in Kendo competition.

Kendo techniques are split into shikake-waza (to initiate a strike) and oji-waza (a response to an attempted strike). Fighters who desire to use these techniques during practice and competition use a training process called motodachi. This technique involves practicing slowly and methodically at first, gradually speeding up to match and competition levels as familiar with move sets increase.


Like most martial arts, there is a series of grades designed to recognize Kendoka of varying skill levels. The rankings start with kyu ranks and advance to dan. Kyu grades are ranked in reverse order, with 6th kyu being the lowest grade and 1st kyu being the rank just below 1st dan. Dan ranks go from 1 - 8, with pretty stringent requirements for each promotion. ​

It's easy to see that a journey to become a master of Kendo can easily span an entire lifetime. Practitioners at 8-dan level have truly committed to a life-long journey practicing Kendo, and are greatly respected in the community.

Although an 8-dan grade may be a little out of reach for most of us, there's no reason not to give Kendo an honest try. Even if you only climb a few ranks during your practice, you'll be experiencing a combination of athletic sport and value system with benefits that are sure to carry over into the rest of your life.